skip to main | skip to sidebar

I couldn't resist doing this pre-Top-Ten-Albums-of-2009 album review. I just have an itch that I need to scratch so bear with me. 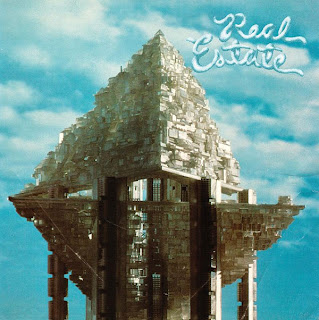 This New Jersey quartet has fashioned this, there debut LP in an utterly transeasonal fashion. I'm listening to it as it shits itself with rain here in Melbourne and despite the summery song titles and the words following their myspace backslash ("let's rock the beach"), it is completely fitting. I've never loved a grey sky so much. In saying that, turn up the heat, and I could lay out in the scolding summer sun, drifting in and out of consciousness and I'll be damned if I should play anything else. This is all due to the band’s utter command of atmosphere—the way they’re able to conjure images of times past through their dreamy, evocative form. Each song contains in itself a world of its own. It's in this way that you could draw a comparison between Real Estate and Broken Social Scene. With trebly surf-guitar haze and a boomy undertow of drums with muted vocals, this is music that lives and dies on its own breeze. The chord progressions feel at once intuitive and also incidental.

After numerous spins (I'm up to my seventh consecutive...), you come to realise that the less immediate songs are ultimately just as gratifying as its standouts. “Green River” flows on carefree and with its strummy acoustic guitar providing a bed for the spangled six-string ruminations that ebb over it. Guitarist/vocalist Martin Courtney’s boyish request “[is] it all right if I walk next to you?” takes on added meaning underneath a blanket of fuzziness that suggests romantic uncertainty and yearning for yesterday as effortlessly as a zephyr. “Black Lake” bumbles along with a suppressed menace echoed in the bouncy bassline that carries the song, allowing it to breathe. Even the fully instrumental tracks, “Atlantic City” and “Let’s Rock the Beach”, act as effective palette cleansers. All aspects of songwriting and musicianship work in tandem here, cleverly suggesting endearing loose ends where there are none.

There is no doubt that this album is one if the most rewarding, satisfying and refreshing of this year thus far and I will be happy to rewrite this review as there is a sure-fire chance that you'll be seeing it again in my Top 10 Albums of 2009. [Watch this space]